If only Behind Every Successful Woman there was a Man


In the last couple of days, I met with Rupa Sardar, Babita Naskar and Shubhra Karmakar three young women leaders in their thirties. You would not have heard of them because they are not the women achievers who are on the TV or magazines celebrating International Women’s Day. When we hear stories of successful women, we also learn of their struggle against numerous odds. Their struggle to complete their education, to balance their home and work responsibilities, of how they faced numerous jibes from family, friends and colleagues to achieve success. While the story of successful men is often  summarised as ‘behind every successful man is a woman’, that of women could very easily be ‘behind every successful woman is a struggle’.  What I found remarkable in the stories of Babita, Rupa and Shubhra was how in each of their leadership journeys their spouses played a central supportive role.

When we met Babita at about 1 pm in the afternoon she was waiting for us eagerly because she had
to be present at the Panchayat office for a meeting at 2 pm. Her 3-year old twin daughters were playing around in the courtyard and we asked whether she was anxious to feed her daughters. She replied in the negative. Feeding her children was not her problem, but finishing talking to us in time was. She said her husband Prabir Naskar would feed the daughters after giving them their bath. She had to attend the Panchayat two to three times a week and the Block office twice or thrice every month. As a public representative she wanted to her job diligently and it would not have been possible without Prabir’s support. Her problem was not managing her domestic responsibilities like cooking, cleaning or childcare. Managing the instruction of senior’s in the party and balancing them with her own social inclinations as a leader was more difficult. For the last three years Prabir has been the member of a programme on promoting men’s participation in gender equality and stopping violence and discrimination against women being implemented by Jeevika Development Society in the Budge Budge 2 block of South 24 paraganas district in West Bengal. When the panchayat elections were held in September 2017 he encouraged Babita to stand as a candidate promising her full support in running the household. She believed him because he was already taking care of their twin daughters from the time they were born. Even before that he had ensured that she had all the necessary care during pregnancy. Today Prabir and his band of merry men or other group members were supporting her efforts to reduce domestic violence in the village. Early marriage and dowry, which were common earlier had now reduced drastically because of the campaigns these men had conducted in their village.

Shubhra Karmakar is one among the million or so ASHAs (Accredited Social Health Workers) who are working across the country to bring preventive health services to people’s doorsteps. She has two daughters one studying in class five and the other in class three. We asked her whether she finds it difficult balancing her dual responsibilities of being the village health worker and that of being a mother. Shubhra laughed at us and said that was not a difficult balance for her as most of the domestic responsibilities were managed by Nishith her husband. Nishith was different from other men to start with but in the last few years since he had joined the programme of Jeevika he had become proactive in caring for the children and in housework. As an ASHA she had to be ready to leave at any time during the day or night if there was a health emergency in the village and while Nishith did fill in for her roles earlier, now he had assumed the role of primary role of home-maker. Earlier she would go to her parent’s place when she was ill, because it would be impossible for her to take the rest necessary for her to recoup, but now she preferred to stay at home with her children. The change that she treasured the most was her freedom to wear a salwar-kameez a dress she had worn regularly while she was unmarried but had to abandon in favour of the more demure saree after she had married. In the last two years she had gone back to wearing the salwar-kameez in her marital home, but still didn’t have the courage to do so at her parents. With the support of Nishith and his ‘band of merry men’ or members of the men’s group Shubhra was now more effective in her roles of getting children and women preventive health care services and they had also helped her deal with some cases of domestic violence which had flared up in the village.

The third of this trio Rupa Sardar is also a young mother and a Panchayat member. Rupa stood for panchayat elections on being encouraged by her husband who has been her rock of support. Not only has been taking care of their 3 year old son but also plays an equal role in running their household. Her husband Prasenjit runs a tuition centre from home for about 150 children of the village and is considered a local leader. Rupa is proud that her husband and other members of the village men’s group often wash their household utensils and clothes at the public pond and is setting an example for other men in the neighbourhood. Prasenjit feels that he has learnt a lot about gender equality after joining the Jeevika programme and that the tuition centre allows him a unique opportunity to set an example for the future.  Earlier he maintained a strict segregation between boys and girls in his tuition centre but now he encourages them to sit together and learn from each other. As a teacher he
had earlier believed that sparing the rod would spoil the child and his students feared him. Now they see him as their friend. Nowadays those among his high school students who are romantically attracted come and share their confusion with him. He said he has advised many young couples to refrain from eloping, a practice that was quite common earlier. Parents are now comfortable with their children having ‘affairs’ while they complete their education. Prasenjit is a true crusader on social issues and showed us a stack of bags lying on the side of the road. These were filled with plastic rubbish that he and his students have been collecting from the village pathways. They are waiting to do a few more rounds of rubbish collection and then hire a small truck to take these away.

Rupa, Babita and Shubhra are among the millions of young women who are coming into new leadership roles in the hundreds of thousands of villages across India. As a society we have to help build a social environment where their leadership aspirations can flower and flourish. However, it is not necessary that this happen on the back of a continued and relentless personal struggle against the forces of patriarchy at home and in public places. Prasenjit, Nishith and Prabir provide excellent examples of how men can provide the necessary support and encouragement. Each of them is very proud of the achievements of the women in their lives but they are also very happy with the opportunity to be able to spend much more time to play and care for their children and manage the homestead. If only women across the world could received similar support, we could also proudly say ‘Behind every successful woman there is a man!’.

Season of Mellow Fruitfulness and Mists 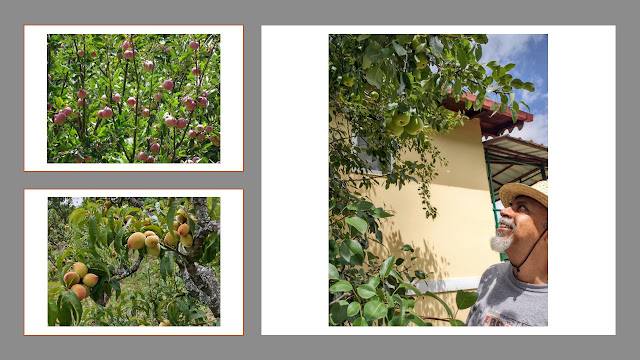 We are now at the tail end of the fruit season here in Buribana. Our house is in an orchard. To the east are long rows of young apple trees. These trees started bearing fruit this year and we kept a close watch and saw the dozen or so apples on each tree slowly grow and change colour over the weeks. Below our house is the more mature orchard of our neighbour Ram Singhji. In this orchard there are apples, and peaches and plums and apricots and a few Kaphal trees as well. The season started with the bright orange juicy apricots, locally known as khomani, in late May. Early in the season we were shown around the orchard by Basantididi. The trees were laden with fruits. The apricots were either gola or chapta. There were a few trees of the smaller local variety, which is tarter, called the chuaru. This year the plums somehow were not so abundant, but the peaches were in plenty. Most peaches had furry skins, but some were smooth. Basantididi also showed us red peaches which looked more li
Read more

Revisiting the Population Conundrum in the era of Resilience

This year the theme of the World Population Day is about resilient futures and choices. On the 11 th of July 1987, the population of the world was estimated to have exceeded 5 billion and this became so much a cause for concern the world over, that first the UNDP and then the UN General Assembly declared the 11 th of July as the World Population Day. In India subsequently the numbers game became an immensely important issue and tied to many doomsday prophesies. The Population Clock became a common sight and reminder in several places across the country. On 11 th May 2000, Astha Arora born in Safdarjang Hospital in Delhi was celebrated as the billionth baby in India, and recently I saw a Population Clock in the Lucknow University campus proclaiming that our current population was over 1.4 billion. Many people in India, particularly our politicians, continue to obsess about ‘over population’, but it may be timely to review how things have changed in the 35 years since the day was
Read more

Eight Billion! So What ?

I need my morning cup before I can function properly. Since I was alone at home I walked over to Lachhu’s tea-shop for the morning cuppa. The sun was already up and the day had begun as it does in any Indian village. I sat down on the bench, nodded my head towards Lacchu and started scrolling down the messages that had come from the early risers. I had not taken more than a couple of sips, and my sleepy ganglia had just about risen from their torpor when Kannu came up the hill obviously agitated. ‘There you are daksaab. Did you see this news today?’ He said waving his phone at me. ‘Kya hua?’ I asked. ‘Did you know the world population crossed 8 billion yesterday. What will happen now? And the news says that India’s population will become bigger than that of China in one year’s time. We are going to the dogs. No one seems to be doing any thing in Delhi!’ Since it was morning there was some activity at the cluster of four shops that goes as the market of our village. Some people were e
Read more